In February 2021 Corona was still challenging artists to come up with novel (or desparate) ways of working together and publicly showing their work. Together with the artists Ingrid Rodewald (Strasbourg) and Jonathan Esperester (Hamburg) I was invited to exhibit work at the Hamburg gallery nachtspeicher23. Our common thread was the idea of being present in our absence and we called the show »Greetings from Here«.

I selected a series of photographs based on ideas of empty seats in various places or vacant promises of elsewhere – it now felt so alien to actually leave the place where you were living, whether to go on holiday, to visit family or friends in near or distant places, to embrace culture, shop, do business or research, or just for the hell of it, or simply to participate in your own exhibition (as in Ingrid's case), that what had previously been an almost mindless, axiomatic habit now proved to be an obsessively precious longing.  Besides the photos, I also included a 13 min film titled »TROP CACHÉ« using film material collected in several such distant places (the tropics of Venezuela, Elba, France). The material was collaged and edited by Jürgen Brockmann, artist and musician, and inspiring friend of many years. »TROP CACHÉ« seems to have all the time in the world, expecially as witnessed by a small girl sitting  in the doorway of her mother's café in the isolated village of Chuao on the Venezuelan coast, observed in listless limbo as she watches the world and a few dogs go by. Hers is a different kind of lockdown.

The film was shown from inside a model of a children's theatre created by Jonathan Esperester as part of his contribution to the exhibition. I hung my photographs from a string running across the large window front of the gallery, like washing left out to dry and in the process of being forgotten. 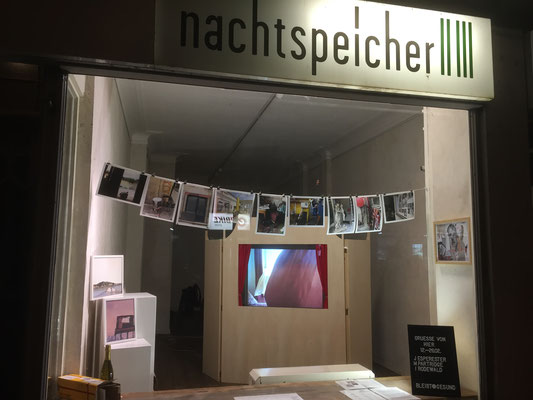 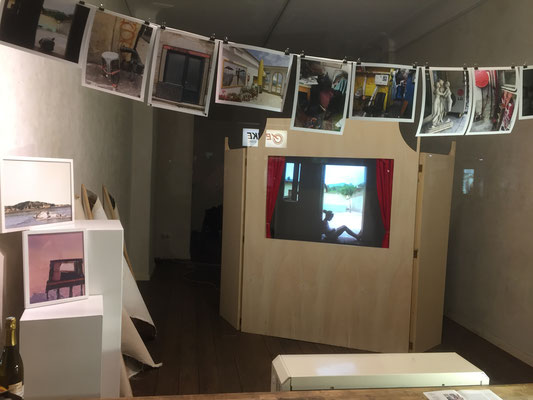